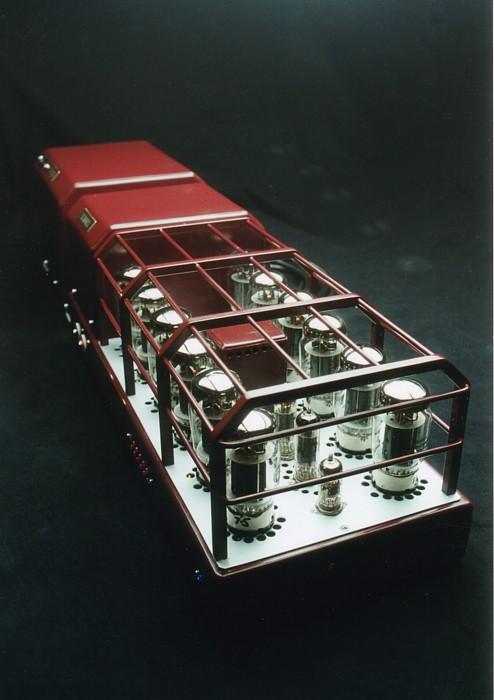 The general characteristics of the 300W monobloc amps are described in this page.
More detailed pages including all schematics are listed at bottom of this page.

Class A1 power.
For 99% of listeners, there is enough initial pure class A power to cover all
listening levels even with insensitive speakers rated for only 81dB/W/M.

Biasing.
There is individual cathode biasing, aka 'auto biasing ' for each of 12 output tubes.
There are no bias adjust pots to set, but there are test points where cathode voltage
of each tube can be measured at idle to monitor tube condition over a long time.

There is also an internal fixed bias voltage applied inside the amp which owners need
never adjust.

With no signal current, and for most of the time, each 6550 tube generates 22W
of heat from anode and screen electrodes, and 11.4W from filament heaters.
Filament heater power remains constant, but idle power of anodes is variable and
manufacturers always disagree about what is the best idle anode current in tubes,
often making grandiose claims that the higher the anode idle current, the better
is the music, because more pure class A is available. But when people follow that
idea, the hotter the tube, the shorter its life becomes, and in fact nobody can usually
tell any difference in music quality if the idle Pda is changed from say 10W to
38W. The happy middle path is the best, and for two 6550 having Pda at 22W
each means adequate class A power is available for first 10Watts, and a high ceiling
of level in AB power is available up to 60W, with THD being below 0.05% for 90%
of music signals.

Well, there are no manufacturers able to sell 24W pure class A amps. That's
because everyone wants more power even if they never need it. So most
manufacturers of PP amps will reduce the Pda at idle from 27W to say 25W
and raise the Ea to say 450Vdc, reduce Ia to 55mA, and reduce OPT turn ratio to
make 6 ohms appear as 5,000 ohms to the 2 tubes. Then the 2 x 6550 can produce
60Watts of class AB power, but initial class A power = 8W. This is still enough
class A for most people, and shops sell more 60W AB amps than 24W class A
amps because nobody can tell the difference, and cost of manufacturing an AB
amp is slightly less than one making all class A.

Two load settings are available for speakers, 2.5 ohms and 5.6 ohms.

The figures are strange in a world where people like to use 4 ohms, 8 ohms, or
16 ohms, ( also written at 4r0, 8r0, 16r0.) 4,8,16 are common nominal speaker
impedance ohms quoted by makers. Impedance depends on signal frequency,
but measured in ohms, so that a given speaker may be 8r0 at 30Hz, 40r at 50Hz,
6r0 at 200Hz, 8r0 at 1kHz, 12r at 5kHz, 8r0 at 20kHz, and 120r at 80kHz.
All types of loudspeakers have very variable impedance ohms often between 1/2
and 5 times the nominal value between 20Hz and 20kHz. Therefore I have always
made my amps so that they will cope well even if speakers are 1/2 the nominal
impedance stated by makers. The lower the load impedance, the worse becomes
all operation parameters of the amp.


With 12 output tubes the initial class A output power could be much increased
if idle Ia was increased and Ea reduced and Pda increased to 27Watts.
This comes at the cost of total class AB power and higher electricity bills.
On the other hand, to get more class A, always use higher ohm loads
than the nominal load match setting. So if you set the OPT for 2r5,
and you have 8r0 nominal speakers, dipping to 6r0, then average maximum
class A Po = 100Watts, and AB Po up to about 150Watts.
The music quality will be utterly transparent.

The THD at 3W is less than 0.03%.
dissipation limits will ever give better music.

Local Negative Feedback.
The output stage has a fairly simple OPT winding arrangement with 20% of
the total primary turns devoted to between cathodes and 0V and 80% of turns
between anodes and B+. The cathode turns act to provide cathode feedback,
very similar to what was first done commercially in a Quad power amp in
about 1950. While Quad used CFB = 10%, I prefer between 12.5% and 20%.
With 20% CFB, the local NFB in output stage varies between about 8db and
16dB depending on variation of 6550 voltage gain with load changes.
The output tubes behave more linearly  and with a lower effective
plate resistance than if triode connected without CFB, but with CFB the high
output power of a beam tetrode is retained, and THD without GNFB = 1%
at full AB power. The CFB winding works to apply NFB between cathode
and both grid and screen. There is typically 5 times more THD without the
CFB windings.

Global Negative Feedback is also applied from the output transformer
speaker secondary to the input triodes in the conventional manner to reduce
output resistance and distortions. Total CFB + GNFB is about 20dB.

Matched tubes are not needed because the sum of the slightly different
characteristics of the six tubes on each side of the PP output stage will
usually be close to each other. The self regulation of individual cathode
bias for each output tube also makes it far less critical to use matched
output tubes.

Dynamic Bias Stabilization is a unique circuit technique used to regulate
cathode bias during high power class AB operation when cathode bias
voltages tend to vary and slightly upset the DC balance in the OPT.
The special cathode circuit with active solid state components do not
have any effect during class A operation. The result allows the amp
to have the same low distortion advantages of a 100% fixed bias amp
but eliminates any need for bias adjustments which cause many owners
nothing but trouble.

Solid state rectifiers and rail filters.
Solid state rectifiers are used  throughout.
Noise in the dc B+ power supply is well filtered out with a CLC filter with
470uF input cap + 1.8Henry choke + 470uF reservoir cap with generously
rated following RC filters for the input stages. Shunt regulation is applied
to the input stage rail. DC is applied to the input tube heaters to ensure
hum remains inaudible. The screen supply is regulated.

The Input stage is a 6CG7 twin triode with both triodes in parallel to
make a single ended triode input stage, and Ia is supplied from a solid state
CCS.
Although set up in common cathode mode, it acts as a differential amp with
input to grid and GNFB to cathode. Since 2008, experiments using the
input 6CG7 as a true differential amp with constant current sink for
commoned cathodes and running the EL84 stage as a true balanced amp
with balanced input to each EL84 grid has proven to give slightly lower THD
but probably made no change to sound.
Power supply temperatures.
The power supplies have no tube rectifiers and run quite cool, and do
not require any special ventilation.

AMPLIFIER CHASSIS generate considerable heat and  require a well
ventilated position and MUST NOT be placed on a heavily carpeted floor.

Output terminals are 2 pairs of recessed 4mm banana sockets to enable
two pairs of speakers to be connected or bi-wiring one pair. Best speaker
cable connectors are gold plated 4mm banana plugs of good quality.
I do not like binding posts with screw tightened connections which always
become loose over time. Protruding binding posts tend to be broken off the
chassis or bent during amp moves.
If a speaker cable is accidentally yanked, you would want it to slip out and
away from the amp terminals, and not pull the amp off a bench onto the
floor. However, banana plugs can break off leaving the plug end in the socket
hole which must then be pulled out using special pliers. So speaker cable
placement away from foot traffic is extremely important.

Power supply size and weight.
Each power supply for each amp chassis is 300mm long, 250mm wide,
and 230mm high and weighs 26kg. The power supply enclosure is mild
steel sheeting, with the mains on/off switch for the channel mounted
in the top of the power supply cover.

Browse the other listed 300W amp pages for more information.....

Back to Index Page